skip to main | skip to sidebar

I am proud to announce the winners of this years Stop Motion Magazine Film Festival 2011.

We all had a great time at the event and I personally want to thank everyone involved. Especially our sponsors Stop Motion Pro 7 and AnimationSupplies.net for making this event possible.
Posted by Stop Motion Magazine at 9:53 AM No comments:

Tonight Stop Motion Magazine will be airing the SMM Stop Motion Film Festival 2011 online at 7:30pm (US Pacific Time). Check it out at www.stopmotionmagazine.com

Stop Mo Film Fest on OCT 7th and the Entries Are!!!!

The Stop Motion Magazine Film Festival 2011
is happening October 7th 2011 @ 8pm
The festival will be held at the Echo Park Film Center (www.echoparkfilmcenter.org)
Current accepted entries to be screened are as follows:

Issue#12 and the Cancelation of Twisted Clay!!! 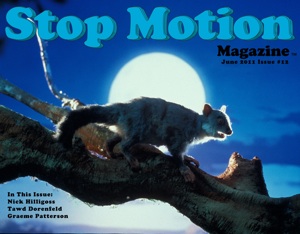 The New Stop Motion Magazine Issue #11 June 2011 is now officially available for Free Download at www.stopmotionmagazine.com. I know, your saying "Hey, it's August! Where's Augusts Issue?!?!". Well, since everyone is on vacation that helps with the Magazine, plus being on the crew of a stop motion television show for the summer, the magazine is way behind. But, I'm pushing through with getting the issues out. Hopefully my crew will come back soon, LOL. So I hope you enjoy this issue which marks the 2 year anniversary of the magazine. WooHoo!!! 2 Years!!!
On a Sad Note....
Twisted Clay Film Festival is Officially Canceled!
The Twisted Clay Film Festival was apparently just a pipe dream this year. I wanted to provide a place for animators of all kinds to showcase their strange and disturbing work and dedicate a festival to them. Due to the lack of Entries and the fact that we already have the Stop Motion Magazine Film Festival 2011 on its way. I felt taking the handful of entries from the Twisted Clay and playing them at the Stop Motion Film Festival would just make things easier for everyone. Sorry, but I got to keep it real...
Also, this may be the last year for the Stop Motion Magazine Film Festival due to the overwhelming flood of Stop Mo Festivals that have popped up all over the world. When we started the first festival there was only the G.I. Joe Festival that we knew about. Over the past year I've seen a handful of festivals that are taking free entries. Which is great!!! But since the magazine is located in Los Angeles and the price of renting theaters is high out here I am forced to think about the time, effort, and necessity of such an event. We will however run this years Stop Motion Magazine Film  Festival 2011!!! The location is still up in the air.
With that said.... Keep Animating...
-John Ikuma
Executive Editor
Stop Motion Magazine
Posted by Stop Motion Magazine at 8:34 PM 1 comment: 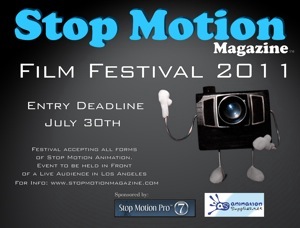 This years Stop Motion Magazine Film Festival 2011 will be reducing the entry fee for films 5mins to 10mins from $35 to $25 per film. We will also be giving College Students a discount with valid student ID, student entry fees will be $15 for each film entered.

So the entry fees are as follows:

Also,
We have a new item in our free section of the website. You can now download and use for any type of production the 6 shot storyboard template.

Enjoy!
Posted by Stop Motion Magazine at 4:32 PM No comments: 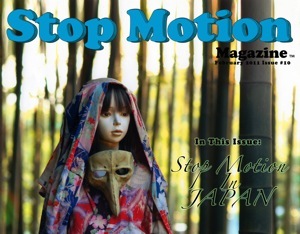 Stop Motion Magazine Issue #10 is now available for Free Download at www.stopmotionmagazine.com!
This issue was originally scheduled for release in February but due to technical issues (Hard Drive Failure), along with further delaying the issue out of respect for our friends and their families that were effected by the Tsunami. We are happy to announce that the issue is now available. There are some great interviews in this issue. We interviewed Fumiko Magari (Animator : New Adventures of Pinoko, Mad Monster Party, Pingu), dwarf inc (Domo, Komaneko), Ryo Yoshida (Master Ball Joint Doll Maker), and upcoming animator Keita Funimoto.
I really wanted to put a lot more into this issue. But since most of the photographs and some interviews were lost during the making of this issue, I was lucky enough to have backed up a good portion of the main articles. I will definitely be going back to Japan in the future and will have more opportunities to meet with animators and studios to give you more insight into Stop Motion in Japan. Also, I will most likely be venturing to other parts of Asia and the world and this will result in further issues of the magazine focusing on those regions visited.
I hope you enjoy this issue as much as I have.
Keep Animating
John Ikuma
Executive Editor
Stop Motion Magazine
Posted by Stop Motion Magazine at 1:25 PM 6 comments: 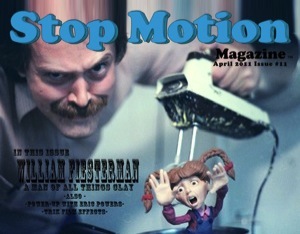 Ok, I know your thinking"Wait thats the December Issue!", but it's the April 2011 Issue with the image of Will Fiesterman which was mistakenly put onto the December 2010 Cover...

So what did we do with the December Cover you ask? We'll we reposted it with Will Vinton on the Cover the way it should have been in the first place. It's only right to have the King of Claymation be on his own cover. There are however some pictures of Will Fiesterman in Will Vintons article, but thats unavoidable considering how few images we were allowed to use for Vintons Interview. Anyway......

Back to the Issue at hand. This issue (I mean the April 2011 Issue) has tons of great stuff in it and a very awesome interview with William Fiesterman. The guy is such a wealth of knowledge and experience. I really think he should have a memoir written.

I also would like to take the time to thank Don Carlson for a great beginners tutorial for lighting Clay Animation. We hope to keep Don around to write some more articles for us and not just tutorials. He's a fun guy to have around and we appreciate his contribution to the magazine.

There's much much more in the issue and instead of you reading this Blog Entry, I'll let you go so you can get to reading the latest issue.